Allergies in the Air - Spring Break is Here! 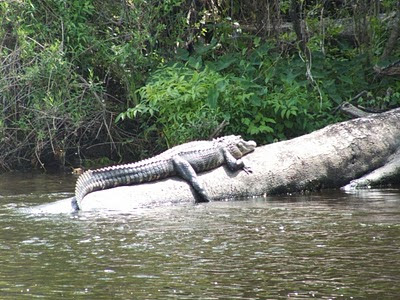 This is 'Gator country!
Not just for the the University of Florida's Gainesville-based football team, but the original occupants of the land - ALLIGATORS!

This beaut was catching a few rays one March a couple years back when I cruised Dunn's Creek, a tributary off of the "upside-down" north-flowing St. Johns River. The unusual body of water runs "uphill" from a marshy section of central Florida, deepens to a depth which allowed a Civil War Naval Battle to take place near Sanford (North-West of Cape Canaveral)and enters the Atlantic Ocean near the Georgia state border.

College kids from around the country usually flock to Florida for a Spring Break, round about now, after going cabin-crazy on snow-bound campuses throughout the rest of the USA - Canada and few European. For years, Daytona Beach was a partying mecca, with white white-sand solid beaches where cars can be drive.

But for those who headed into the state's wilderness areas in search of sport - or on a "funny" mushroom hunt - could bump into one of Florida's living symbols, catching a few rays.

Always, with one eye cocked for any pale snacks which might splash his way!
Posted by Jack Owen at 9:40 AM