Tools To Write By 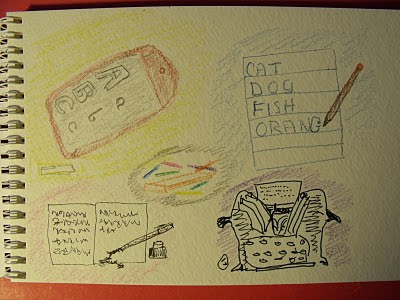 I don't know what children use to write their first words today, but white chalk and a grey slate board was my first tool.

It's not quite as archaic as it sounds. Teachers communicated to students by demonstrating on a wall-mounted blackboard, using chalk. A classroom toady, inevitably seated as close to the teacher's desk as was humanly possible, gleefully grabbed the chalk-eraser at the end of class to expunge the lessons of the day.

Later it moved up to colored wax crayons which, fortunately, I did not develop a taste for. I vividly recall watching the rigorous efforts of the matronly schoolteacher wielding a rough cloth towel on another kindergartner, trying to expunge the purple lipstick-like glob from him.

Teachers indulged in a lot of “hands-on” activity, from tweaked and cuffed ears, to knuckle ruler-raps. Lurking in the background was the ever-present threat of a canning and the ultimate humiliating punishment – a thrashing before the assembled school. In a world which readily accepted the premise of “spare the rod and spoil the child”, and heartily subscribed to the concept of corporeal punishment as a valuable teaching tool, watching one's P's & Q's was a survival tactic.

Transferring oversized block letters from chalk to crayon to pencil and reducing word size to fit between the lines of ruled paper, was a milestone moment.

The ritual of pencil-sharpening, at the hand-cranked pencil-sharpener mounted on the wall – within striking distance of the teacher – encouraged most to acquire a pencil box with rubber-eraser and hand-held pencil sharpener. It also introduced pen-knives into the lives of children who were repeatedly admonished to “don't run with an open blade.”

Another major leap forward, from creating whole words in pencil, was to join block letters into cursive, using steel-nib pens and black ink. The institutionally issued ink, carefully measured into porcelain ink-wells by ink-monitors before being placed into individual desks, became a constant source of consternation. Not only did it react to weather conditions, rather like syrup in the winter and watery during summer, but it seemed to have a mind of its own.

Along with pen and ink came the indispensable blotting-paper. A thick, usually pink or green, absorbent paper whose pores soaked up spilled ink and dried-off freshly penned prose. [Also, most effective as pellets, the ink-soaked missiles most found – and always left - their mark.]

The skill of cursive words was not so much in the steady hand of the writer so much as the careful intake of ink. To much created messy disaster and to little created chicken-scratch paper rips.

School-issue pens, with their slender white-wood handles the size of a drinking-straw, and sharp steel-nibs, were strictly utilitarian. They were designed to get the job – children, writing for the use of – done. The nibs may have been designed to create cursive words; the split point spreading for broad down-strokes and together for other maneuvers, may have looked identical but each reacted differently. Either they delivered to much ink to the point of the pen, or not enough. The first resulted in ink blobs on paper where their should have been a letter – the other called for a quick flick ( which could result in a Jackson Pollock-appearing page... and neighbor) or a student's saliva. The theory was, moistened pen-nibs allowed the ink to flow more freely.

One very apparent reality, based on the appearance of black-ink lipsticked students, is it was a common practice. Also, a precursor to smoker's nicotine-stained fingers, ink-covered fingers were a sure indication of a pen-writing student and an introduction to a pumice-stone scrubbing session.

No all of the writing disasters were a result of the product issued.

Boys being boys, numerous other uses were found other than writing, for pens. They became darts or arrows, depending whether they were thrown or projected from a sock-garter or rubber band. They were excellent close-quarters swords or daggers in impromptu fights and scuffles. They became catapults for rubber erasers broken into capsule-sized projectiles stuck on the nib, braced back and released. They were also quite handy and retrieving coins in floor-cracks, and other objects just out of finger reach. Following their extra-curricular activities, the nibs did not fare well in the intended purpose, consequently exercise book writing was not of prize-wining copperplate quality.

Depending on the depth of the student's parents pockets, school-issue pens could be replaced with store-bought pens and special gold-tipped nibs or fountain-pens with platinum tips. The ritual began with unscrewing the bottle of quality ink. Blue was most popular, followed by purple, red and green; although the red was usually reserved for diagrams – or teacher's comments, corrections and grading. A rubber tube within the shaft of the pen was depressed and inflate – siphoning ink up from the bottle – by a lever in the body of the shaft. Depending on the bladder size, a writer could complete several pages in luxury, with no need to dip a pen nib.

That was the extent of school writing tools, despite the newly invented ball-point pen marketed by Biro and later, Bic. The schoolboy scribblings which some teachers described as “marks left by a drunken spider who crawled out of an inkwell” caused ball-point pens to be banned from school.

Pen-nibs may have created pools of ink, blots and scratches but they forced students into measured and methodical strokes to ensure fewer errors. The universal point of ball-point pens had so such restrictions and the resulting writings were often as indecipherable to students as well as teachers.

My quantum leap into the writing tool future, beyond handwritten notes, essays and stories, came for me with an ancient early 1900's Oliver typewriter, retrieved from a junk-shop after school. It weighed in at 30-pounds, looked like the twin-peaks of a two-hump Asian camel (or Mae West) and took a major down-stroke workout to get the keys clacking onto the roller. 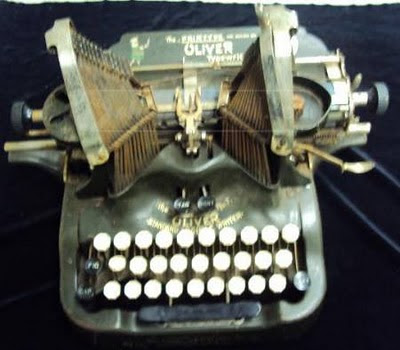 It may have looked odd, and could give me a hernia relocating it from one desk site to another, but the wobbly printed letters were legible. Writing produced on paper via a black-ink ribbon, began to look like a book.

It launched a lifetime love and a career in the craft which has lasted to this day.