Sadly we have to record the passing of investigative journalist Stetson Kennedy recently,at 94. Over the years we'd run into him at various writing and book related gatherings around Florida and three years ago helped celebrate a birthday at Anastasia Books, St. Augustine.

This blog is a bitter-sweet record of that event, and a tribute to a pathfinder in the profession. 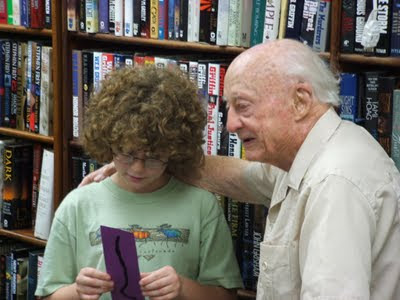 One of his youngest admirers, an eleven-year-old neighborhood child of the celebrated St. Augustine resident, recited an insightful ode to the sprightly old man:

Stetson Kennedy,
Stetson Kennedy,
The perfect remedy,
For the KKK
* *
Once upon a time,
There was a boy,
He stole fruits from
his neighbors for joy
* *
This boy, now a
young man,
Decided to stop the
Ku Klux Klan
* *
Guess who helped him
rat out those trout?!
It was Superman
who helped Stetson out
* *
Years ago, he was a spy
But at 92, he is still
young and spry
By Riley Fox Hillyer


The assembled politicos, pundits and professionals gathered to sip wine, nibble on cheese and witness the cutting of a birthday cake within the stacked racks at Anastasia Books, owned by Kennedy’s current wife Sandra Parks, enthusiastically applauded the young bard.

Then, less than harmoniously, they rendered several ragged verses of “Happy Birthday” throughout the evening.

For Stetson Kennedy it marked yet another milestone along a journalistic path pocked by plaudits and controversy from the WPA (Works Progress Administration) era of anecdotal recordings of Florida’s rural history, to clashes with the Ku Klux Klan and the book publishing cottage industry that sortie gave birth to.

His young admirer, during an earlier inter-school competitive speech for Fifth Grade, described his initial disappointment when his new neighbors moved in. He had hoped for kids his own age but ”… I discovered it was just another boring old couple, as usual.”

However, his interest perked up when he discovered the character in a book he was reading (about a young man infiltrating the KKK and exposing its secrets to radio-fans of Superman) was none other than his new neighbor.

“ He was a spy. I couldn’t believe it. I had a humongous desire to meet Mr. Stetson Kennedy. I felt very nervous, almost faint, when I met him,” Riley wrote.

Considering Kennedy’s profession, his wife’s occupation and the locale for the reception, Riley’s summary was appropriate.

The fact “the old guy” had led such an interesting life prompted the young boy to echo an oft-repeated observation,

“Well, I guess you can’t judge a book by its cover.”