IRENE -- The Hurricane -- Is No Sweet Thing 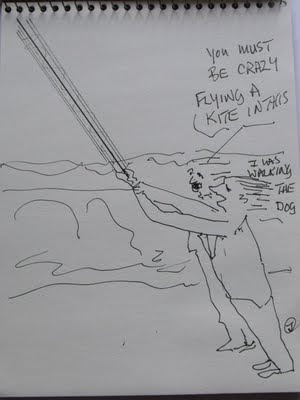 Labor Day Weekend, the last weekend of summer in America, is traditionally the "official" start of political races when all the registered blowhards spout speeches and press the flesh. It also seems to have become something of a tradition of Mother Nature to provide a hurricane to send vacationers scurrying from the shore.

IRENE, the Cat-3 hurricane currently sweeping north along America's eastern seaboard, has already claimed eight victims. They were thrill-seeking sightseers swept from a stone jetty at south Florida's Boynton Beach inlet by a giant wave -- and the eye of the storm is still hundreds of miles offshore.

Officials are concerned all the way north into Canada; Charleston, New York, Boston. The entire summer population of Ocean City, Maryland -- roughly the size of Manchester - is under mandatory evacuation.

It will blow itself out and dissolve in the colder waters of the north Atlantic, eventually. BUT, it is 1,000 miles wide, has sustained winds of 110-mph and is kicking up big-time waves too scary for surfers. Eventually those generated waves will wash up ashore in UK and Europe. So...break out your boards...and board up your stores.