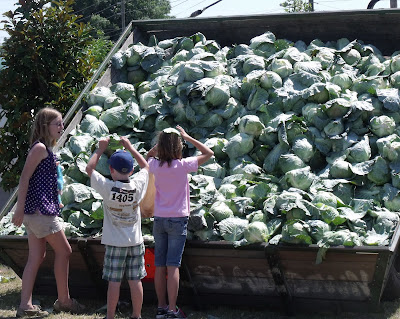 The chance to knock off the "Hot-Air Balloon Flight" from my "bucket list" (stuff I want to do before checking out) was punctured when the operators failed to show at the annual "Cabbage and Potato Festival" in Hastings, Florida, yesterday.

Hastings, known as the potato capitol of Florida - alongside the nearby community of Spuds (I'm NOT making this up)- marks its prime crop harvest time with a fund raising fete sponsored by the local Rotary Club. . 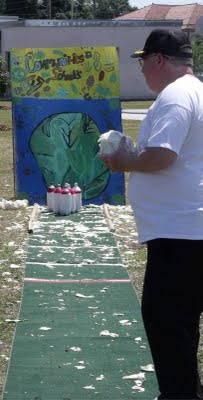 Its very much a down home, low-key, grass-roots festival with pride of place going to gawking at John Deere tractors and mowers. The FREE bowling lane reflects the versatility of the vegetable ( largely untouched or recognized as FOOD at any school I attended ). Instead of regulation bowling balls and skittles, weighted painted plastic soda containers became the targets of hearts of cabbage bounced, bowled, bunged down a synthetic-grass lane. 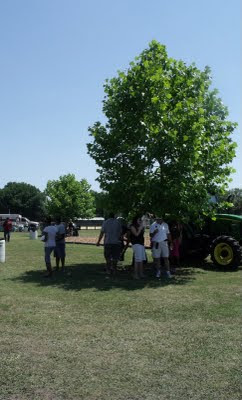 Wise in the ways of the land, strollers dodged from shade-tree to shade-tree, working the assortment of stalls offering everything from primitive art to potatoes and politics - Left and Right represented by Democrat and Tea Party tents. So, even without the 90-degree scorcher - there was plenty of hot-air to lift a dozen ballons or more, off the ground.
The closest thing we saw to Hi-Tech was the wading pool 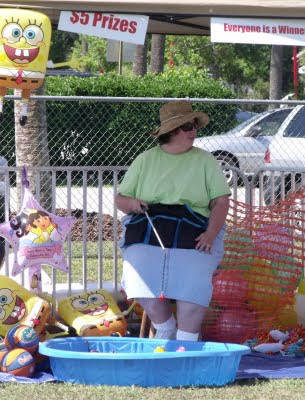 filled with plastic fish which could be caught by youngsters using a rod and line with a magnet - instead of hook - to capture the bobbing prey for a prize; air-filled toys.

One of the more innovative food choices offered by vendors was a hot-dog stand where the regulation white-bread pap offered as a bun was replaced with a potato-bread roll and the promise of “all the fixin's” to make the “Tater Dog” tasty. 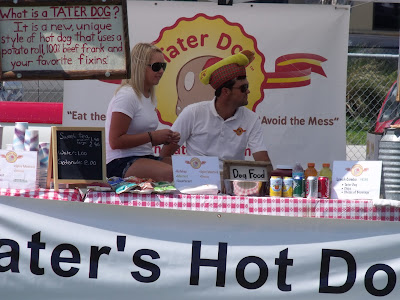 The operator should have won a prize for most creative hat. It would have wowed them at the Westminster wedding – last week!
Posted by Jack Owen at 1:02 PM