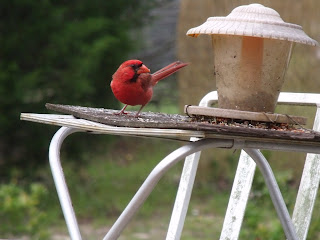 A Florida fog shrouds pine trees and live-oaks with their clumps of tangled Spanish moss, in a moist post-dawn grip as a result of yesterday's thunder and lightening drenching.

We'll be spared the direct rays of the climbing sun, blanketed somewhere above the Atlantic Ocean 50 miles away, and its searing heat waves for an extra hour or so.
No need for the air-conditioner to crank up into its expensive-sounding
rattle as it fights the heat and humidity of mid-September's last gasp of summer.

The wiseacre pundits, scoring points in their endless morning television banter, will hoot derisively when the ex-surfer turned forecaster comedically assumes the position emulating Igor, from a multitude of late-night Frankenstein skits, to announce the position of our seventh hurricane of the season.

Dripping beads of air-born moisture splash into the new pine deck, retarded by a weather-proofing solution which will probably prove fatal to humans in a few years. A game yellow blossom shows itself on the wilting potted tomato plant. Maybe one last tasty red morsel before biting into a waxen version from the supermarket, later. Purple wild Lantana cascades from its Terra-cotta pot, perched on the white-painted wrought-iron which now supports a wobbly metal side-table makeshift base for the bird-feeder.

Brilliant red cardinal families squabble in a pecking-order of their own making, scattered by the arrival of a blue-jay or interference from mourning doves who prefer its safer climes than nearby fields and alert hunters seeking something for the pot.

Seems to me there's been an added volume of shots, in or out of hunting season, during the past year or so of unemployment, lowered wages and foreclosures. Impatient fishermen, with families to feed, are as likely to clamber up a tree and shoot the shadows schooling in the stream below, as biat a hook and cast a line.

A scratching of nails on glass heralds the return of Basher, mostly spaniel with a splash of chow based on the black spot marking his pink tongue. He will have completed his morning rounds, touring his territorial half-acre boundaries hemmed in by chain-link fence. He's already had his breakfast but it won't stop him clanging the bowl with his collection of metal tags cluttering up his collar, before turning those hopeful dark brown eyes in beg-mode. Passively he'll sit when I dose him with anti-epilepsy pills, knowing there's a dog biscuit reward. It won't stop him emulating the squirrels.

(Ooops...shouldn't have said that out loud – his ears twitched and he tensed to dash out the glass sliding doors.)

Squirrels (soto voce), cats and the occasional rabbit, stimulate his exercise regimen. The tiny town of Interlachen, midway between touristy St. Augustine with its legendary Fountain of Youth and Gainesville, its University campus and Gator football team dominating the city, is a one-traffic-light community which just acquired a four-lane commuter highway divided by a median strip and, a second traffic light.

The heat, unleashed marauder dogs, rustling and rattling in the undergrowth all combine to limit safe spaces to walk the dog. There's a mile or so of ancient-growth live-oaks still intact after the Department of Transportation swept through with bulldozers, front-end loaders and tarmac to transform green swards into blacktop highways, The shaded arch of trees provide a concrete path, past homesteads with grape-vines held-shoulder-high off the ground in organized rows, and cattle clustered around a sink-hole pond of white blooming wild hyacinths.

That route, plus a circuit of a nearby supermarket plaza front and back, where the tantalizing odours of dumpsters tinge the air, are good walking spots for us. I get my daily dose of exercise, and Basher gets his nails “clipped” in an environmentally Green way, on the concrete, at no cost to me.

The first hour of Monday has slipped away. Tea gone, Basher itching to go.

Time to move into the new week before the sun burns through, shades come down and outside activities are dashed for the day.

When the cold snaps arrive I may look back at today with feelings of warm nostalgia.

But to echo Scarlet O'Hara's sentiment, I'll think about that – tomorrow.