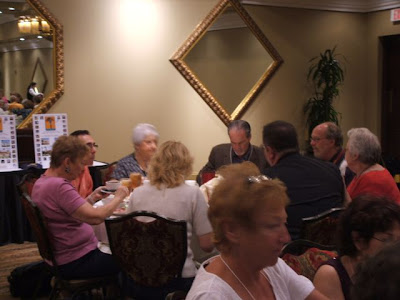 Robert Macomber (arrowed by the mirror at head table) the keynote speaker at Friday's Florida Heritage Book Festival in St. Augustine, revealed one of his marketing “secrets” which have propelled his Civil War nautical yarns, starring Peter Wake, into a successful series of books with a world-wide readership.
Early on in his novelist's career he and fellow Matacha Island neighbor best-selling novelist Randy WayneWhite, were lowering the Plimpsoll line on a bottle of rum, discussing the business.
“I asked why he held signings in clubs, bars and taverns,” Macomber told a SRO audience of authors, pens poised over notebooks. “I was selling and signing my books at bookshops, libraries and museums.”
The audience laughed in anticipation.
“Booze sells books,” the sage had replied, no doubt lifting his glass in silent salute to the strength of the spirit.
Now, world traveler, lecturer, raconteur, writer and military adviser, parties his way into the hearts and minds of growing numbers of fans and followers. Like the snowbirds, both natural and touristy who flock to the “Sunshine State” he has his migratory path mapped out to reap the benefits of strategic marketing.
Check out Macomber's website http://www.robertmacomber.com/ for the working itinerary of a self-propelled professional writer for an hors doeuvre of how its done, Part of the year he's in the Pacific, part in the Atlantic as a guest speaker aboard luxury liners. At other times he is popping into European, British, Australian and Mediterranean locales, either guesting or questing as he gathers – first hand – knowledge for the setting of his next book.
I'm not going to preempt his smorgasbord of spiels for all occasions, you can do your own research or attend his next launch or partee.
At an upcoming “Pirate in Paradise Festival” (November) in Key West, he'll guide followers around the naughtier parts of Key West before hosting a book-signing party for “Wakians” - nickname of his protagonist's groupies.
Its rough work, he admitted to the throng of eager wannabe block-buster writers, but he forces himself to have a good time despite the 600 or so people, book in hand, waiting for his sacred signature before leaving one of Macomber's parties.
Like the sage said:”Booze sells books.”