Who You Meet Today Could Be On CNN - Tomorrow 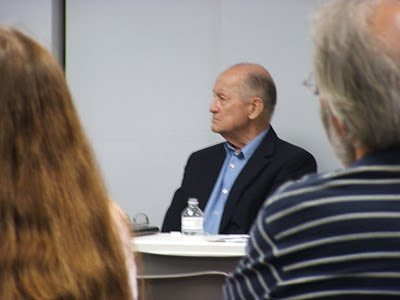 Hurricane Patties, the pirate-themed waterside restaurant in the mainland side of the Intracoastal Waterway, was busier than usual for “Pirate's Day”. A blasting rock band, pirates and wenches in Johnny Depp look-alike outfits, worked the tables while we tried to talk.

Marie, a former journalist up north in Washington, D.C.-Maryland area, contributor to he Christian Science Monitor and mother of six before becoming the widowed Mac's second wife. He was a psychologist and homicide forensic expert, specializing in deaf and mute patients, author of seven books and 200+ articles on the subject. The specialist school in his hometown of St. Augustine, boasts Ray Charles as one of its alumni.

Their latest book (Deadly Charm) published by Kensington Press, is an exploration of the motives of a less likable student, Patrick McCullough, the only known deaf serial killer.

In shopping for a publisher, the Vernon's short-listed. Kensington Books as number two on their list. The true-crime genre specialty pros opted for the Vernons' first offering (Deadly Lust): story of a local lad (William Darnell Lindsey) who'd been bumping off ladies around town to get his jollies.

They quickly learned there is a “carved-in-stone” formula for a successful true-crime book: it has to have a beginning, middle and end with no doubts about Good Guy and BAD guy. And the villain ALWAYS gets it in the end.

Uniquely,”Mac” had known the second killer from the age of five to his violent death at 42.

Ironically, he also knew the first killer too. When Mac was a lad with a newspaper route, he had delivered newspapers to the serial killers home.

We shared a common thread,I told him. One of my newspaper route customers turned out to be a British spy for the USSR.