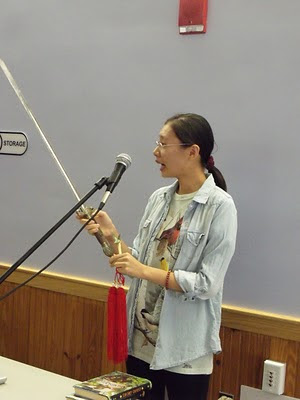 A roomful of white-haired wannabe and real writers sat in awe Sunday, soaking up the words of a two-time Top-Ten NYT best-selling author telling them how she did it.

The 16-year-old - that's right, SIXTEEN YEAR OLD - writer who's still attending high school in Gainesville, Florida, has published two books (“Swordbird” and its prequel “Sword Quest”) which have received world-wide circulation and acclaim by children and adults. The first book, written when she was 13, made her the youngest best-selling author in the history of publisher, HarperCollins.

Her fantasy world, of talking birds who enjoy a chat and a spot of acorn-tea but sometimes have to take up arms to fend off evil, is her “Peace” story response to the New York twin towers tragedy of 9/11. She and her family, then living up-state, had viewed the city from the observation tower in the summer. Her book, she told a rapt audience, was inspired by that attack and a dream she about birds facing evil.

The articulate, animated, young writer reeled of a work and achievement roster which drew “aahhs” and “ooohs” from the mostly sedentary audience with grandchildren older than the speaker. Her poise, focus, and enthusiasm for all the tasks she has taken on from piano, math, science, ballet, psychology and sword-fighting energized the somewhat somnolent audience. It could barely contain itself, itching to pepper her with questions at the conclusion of her address.

Did I mention she was a seven-year-old who only wrote and spoke Chinese when she entered the United States. She has since translated the English text of her book into Chinese to reach HarperCollins' expanded market. And, between gearing up for exams to enter college where she plans to obtain degrees in biochemistry and comparative literature, she's preparing a sequel to round out the trilogy.