Starting Is Not For Sissies 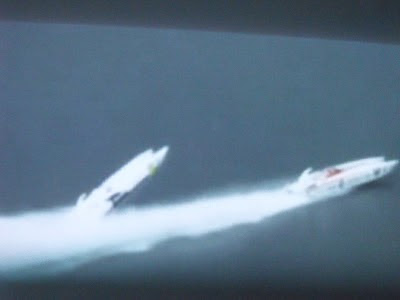 A couple of decades ago when I wrote a boaty column for the Palm Beach Post, as light relief from chasing cops and criminals on the south Florida police beat, I was given the "honor" of starting the International Off-Shore Power Boat Races from Miami to Palm Beach and back.

Millions of dollars worth of boats with a crew of three were churning up the sea maneuvering for position, waiting for the pace-boat I was aboard to lead the pack and for the checkered flag to be lowered for the START signal...by me!

Earlier, writing an advance piece, I'd spoken with an off-shore driver who told me harrowing stories of crews breaking limbs as the hulls became airborne and smacked into waves – solid as concrete. He airily told me they sometimes dumped the guy overboard, in a life jacket, for the chase-boat to pick up.
“Saves time and gas.”he shrugged.

As our pace-boat picked up speed and I firmly grasped the pole sporting the flag, it flapped noisily and tugged for freedom. What started as a -- “ Don't go over the side” joke -- shouted by fellow news-jockeys bouncing on the slick vinyl stern seats, soon took on elements of scary reality.

The hull lifted and smacked with increasing speed as bow-waves of pursuing boats poured on the gas, inching throttles of mega-horse-power engines, forward. Noisy cracking flaps from the black-and-white flag overhead, mixing with shrieked conversations between committee members arguing about knots, distances, wind and time, whipped back along with stinging spray from our bow waves.

The flag and pole, once bravely held aloft and anchored by my 150-pound frame, wobbled and staggered as the pace-boat bounced from wave to wave.

White, and some pale-green faces, stared up at me as journalists and PR hacks jounced around. I mouthed the word HELP several times before fingers grasped my shirt, shorts, whatever, to keep me anchored aboard. Other hands grabbed the wavering flagpole dangerously close to the area where I tried to clamp it in what I call my “fireman-sliding-down-a-pole” grip.

Suddenly, as the white bones-in-the-teeth of a thundering fleet of throttle-gunning powerboats threatened to over-run our churning wake, the inaudible shrieks from forward were reinforced by a power-horn blast signaling -- START!

We'all collapsed in a heap, the checked flag was lowered, the fleet pounced forward and we were drenched in a deluge of crisscrossing waves which tossed our slower pace boat about like a ping-pong ball in a washing machine.

I politely declined the honor next year, to repeat my role!

This link MAY take you to a few hairy moments recorded in recent races http://www.youtube.com/watch?v=2oBr8bHuZ1k&feature=player_embedded