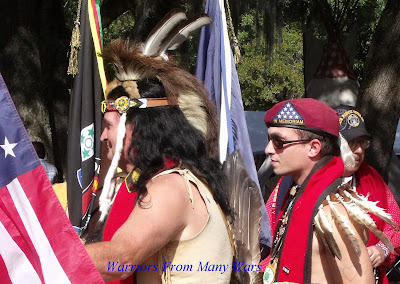 Had a rare chance, Saturday, to meet some real McCoy American Indians at their annual post-Thanksgiving Pow-Wow just down the road from Fort McCoy. The fort doesn't come up in conversation much, due to it being built during the late Seminole Wars. Maybe coincidentally, the only Florida-based Seminole faces I saw were on Harley-Davidson biker tee-shirts worn by tourists... 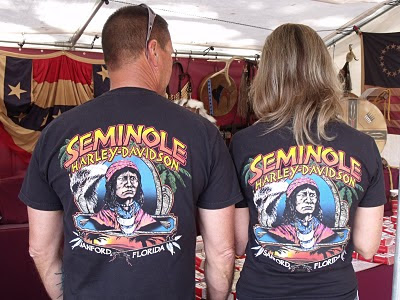 However, there was no lack of traditional costumes displayed in a kaleidoscope of prime contrasting colors, set off by home-made trinkets and jewelry wrought from metals, mirrors and glass. Feathers and furs mixed with leather and spurs, bound by intricately patterned beaded belts. Tassels and fringes, bones and bells decorated vests, dresses and boots. Sometimes a mix of old with new caused a double-take like when a warrior rolled back a leather amulet to peek at a digital wrist-watch, or a basket-weaving squaw, cross-legged on a blanket, took a sip of coffee from a Styrofoam cup.

Hereditary roles of Chiefs and Princesses have been replaced, in large part, by democratically elected tribal leaders...so I was told. The times, they are a'changing... 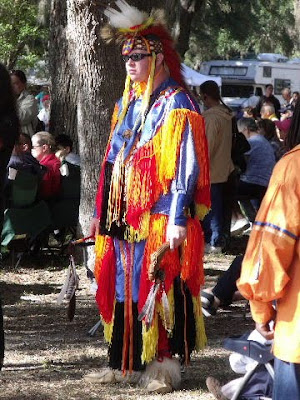 An adult raven-haired Ohioan, her hair plaited to drape at bosom level, recalled less festive times as the family odd-duck – all her sisters inherited red hair from their Irish/Indian parents. In the school playground the prejudices of the times tempered her into a strong independent woman. She is heard daily by drivers stuck in traffic and housewives watching the Soaps on television, in a variety of voice-over advertisements.. Her “Oxford English” accent would make a Cockney blush but she's not afraid to try - anything. 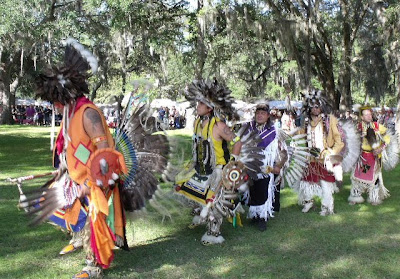 The folklorists reciting stories of bears and the great Spirit, or singers lamenting lost loves and hard times, were a prelude to thundering drums and chanting voices raised above the cheers and clapping of the crowd, following the silent parade of all flags: American, Tribal, Memorial flags wereborn aloft by veterans of current wars in honor of the warriors from many wars. 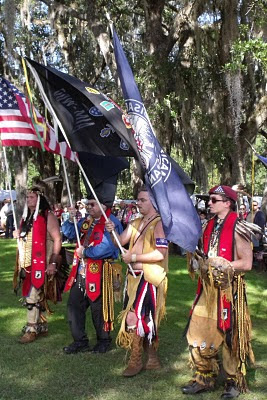 Quite amazing. The real McCoy.
Posted by Jack Owen at 8:25 PM