A Tequila Sunrise to Remember 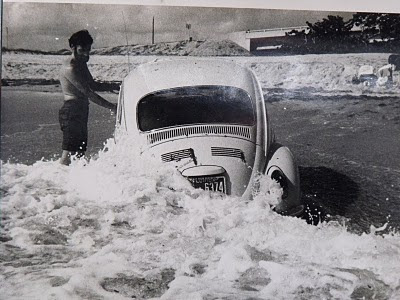 With holidays and partying just around the corner I'm reminded of a Tequila Sunrise I'd as soon forget.

It seemed like a "good idea" at the time - following a tequila quaffing contest - to drive along Florida's sandy Atlantic beach to see a rocket launch from Cape Kennedy/Canaveral.

Worked out fine until we ran into a patch of soft-sand at Sebastian Inlet. The fishermen were highly amused as they watched, without moving a bait-bucket to help, while we hugged and tugged to no avail.

There's something about frequent dousing of gallons of sea water, while trying vainly to stop waves swamping in the Volkswagen windows. It can sober one up in a hurry. I'm the hirsute one playing King Canute until the tow-truck arrived - while the driver/owner was hopping around taking pictures for insurance company records.

Learned a couple of valuable life lessons from that experience:

* PAY insurance bills on time. Missing the deadline resulted in - no settlement.

* Don't drive when drunk - unless you want to end up in the DRINK.