Studying the Joy of Cooking, Sex, & Electronic Publishing Does Not Compare to Reality 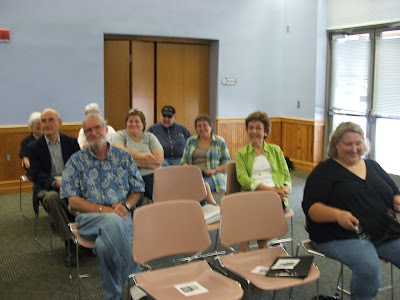 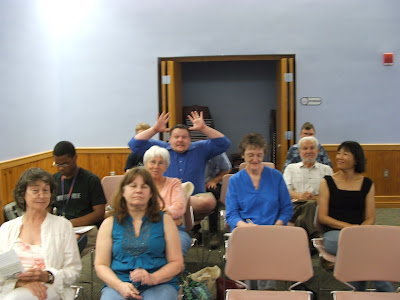 Nineteen attentive (and one irreverent) writers gathered in Gainesville, Florida, yesterday to hear all I had to say about the art and anguish of Electronic Publishing. As an “Expert”, with two books and one feature story whirling around the digital publishing world, I'd been called upon to relate the joys and woes of virtual authorship.

It might have been a larger audience if the WAG (Writers Alliance of Gainesville) President's email reminder had reached its target audience, and it would have been wonderful if the pages of notes, references and links I'd compiled and printed were not still sitting on the desk – at home. 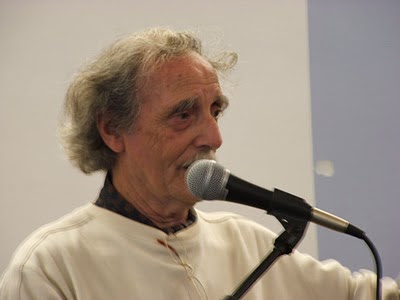 I just can't wait to replay the hour-long tape, to find out what I said !

The audience (did you spot the irreverent one?) was promised a listing of links and useful info would be posted on my blog. It was not meant to be a crafty way to drive people to view it – but it ain't such a bad idea now I think of it. Hope you are helped on your way to the New World of Publishing.

Self-publishing has always had the stigma of “Vanity Press” label hung on the author's efforts by the traditional publishing houses. But in its early days, long before social networking was a click of the switch and a tweet to pass the word, hard copy print pamphlets, broadsides and books were the only way to reach a large readership.

American patriot Thomas Paine stirred the pot of rebellion with several missives in the 18th Century, enough to provoke English legislators to have him tried in absentia and condemned to be hung for treason against the Crown. One of his Philadelphia based rent-a-publisher produced a four-page pamphlet printed for a few pennies in 1776. Today, the first edition of Paine's Common Sense, is listed by antiquarian bookseller Bauman Rare Books, at $52,000.

Paine is not around to claim any cash rewards for his efforts, but a couple of “instant success” electronically-published writers have done very well recently, thank you.

The “instant success” in the electronic world, where he had been touted as the possible “First Millionaire”, has encouraged a revolution amongst writers to by-pass the tortured, lengthy, hurdle-handicapped traditional route – and low royalties. Konrath claims he received 500 rejections before selling his first hard-copy book. He's also pumped out 7,000 letters to libraries, done signings at 600 bookstores and guest-blogged on 100 sites in month.

No doubt his reader following helped when he jumped onto the electronic publishing carousel for an exploratory spin – and took off, outpacing all previous brick & mortar generated sales.

But a hot new star of the EP horizon recently reversed the trend. Former aide to the adult disabled, Amanda Hocking, 26, who made meals and cleaned up after her clients, would pop a can of Red Bull (POWER-drink) and type up the novels in her head influenced by Vampire, Zombie and Troll young adult readers strolling the Wal-Mart supermarket bookshelves. Her output in EP stuck a chord with that niche market and clicked along steadily at a few hundred sales a month until January, this year.

Until recently, her only hard-copy books have been published by LuLu, the ubiquitous imprint found on many do-it-yourself writer's efforts.

The traditional publishing world is all abuzz about the four-book deal she inked with St. Martin's Press, following an auction of rights to her next series, in the Young Adult paranormal genre, last week (March 24). Other competitors, including Random House, Simon & Schuster and HarperCollins, dropped out when bidding hit seven figures. Guesstimates put the gavel-price at $2million for world English rights, according to a New York Times story!

But – before you leap to the fridge, pop a Red Bull and crank up your computer – spend a while reading the blogs and background on these phenomenal “instant” successes. They didn't gain without some pain. And its only just begun.

One WAG member was concerned about the ephemeral nature of electronic books, They can be wiped out by everything from sunspot activity to a refrigerator-door note-magnet frying a file, and obsolescence. He pointed at props I'd taken to the talk, including a 3,000-year-old piece of papyrus, a 17th Century leather-bound book, a copper-plate writer legal parchment of Indenture, including wax seals, and some 20th Century customized books.

He feared electronic books would not outlast our generation. The written word, reproduced on battery-operated readers, could go the way of 8-track cassettes. I agreed, but pointed out classic works have been reproduced and reprinted in some fashion, for centuries.

Using my favorite overused phrase of the year, I said:

“It depends. If its worthy of revival it will survive, Thomas Paine's works will still be in print – somehow - long after we have gone!”

List of helpful links include:
(you may have to copy & paste)

The tools are there, YOU have to do the digging to find out about Royalties, Formatting, Pricing and a zillion other questions churning through your mind.