Enjoy every moment, while you can... 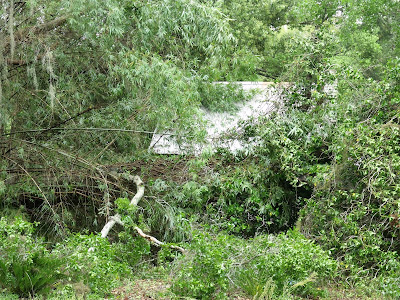 The dark, vine-wrapped live-oak tree trunk, about three-feet thick, missed the roof - and master-bedroom - by THAT much.

A tornadic storm line which swept through Florida yesterday caused physical and financial damage, but none to my frame and tin-roof 1900AD house nor, miraculously, to anyone inside. No injuries or loss of life for "Breaking News" crews to shed crocodile tears over.

The ancient tree, probably with its roots loosened by recent downpours, keeled over under assault from a powerful squall-line, which produced flooding rains, hail and tornado warnings over several states. The tree's upper trunk plummeted between a clump of spindly palm trees,leaving them unscathed. It tore down the main power-line, ripping it from the stand-pipe and meter-box to leave it live in the soaked grass. 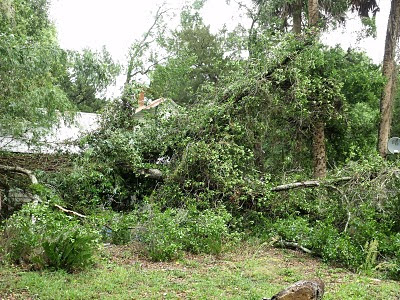 Sprawling branches managed to miss making a mark discovered - yet.

The tenants, their three boys and three dogs were unaware of the tumble down for several hours, assuming from the lack of lights, television and other appliances, there'd been a power outage due to the storm. My phone began ringing moments after their discovery! 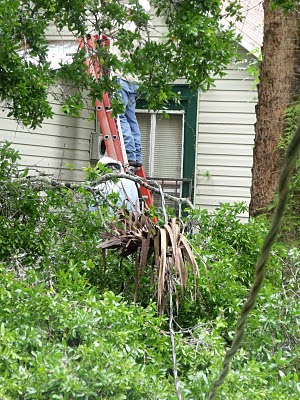 So much for writing, editing, marketing, researching, filing, interviewing, transcribing, today. A chance (do you believe in chance?)meeting on the way to the house with an obliging FP&L (Florida Power & Light) meter-reader and a short-cut toll-free call through the labyrinth of button-pushing exercises, conducted by a robotic electronic voice, and a real person who responded with empathy. 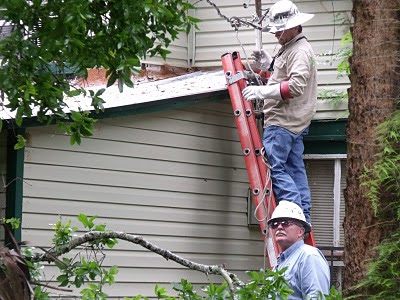 The guys who showed up shortly after were amiable and efficient and had the job completed within an hour of arrival. Never thought I'd give kudos to FP&L, with its escalating energy costs and bigger bills, but they were primo!

It was a day of unexpected pluses -- compared to what might have been!
Posted by Jack Owen at 7:55 PM