A Rat (Island) Race Awaits Beyond The Morning Mist 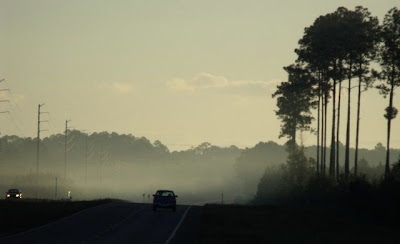 A misty morning on the marsh - a portend of the morning.

It is written, in the book of "Murphy's Law".

The wind shall desist on the date of the annual Decanter Challenge Regatta -- organized by the Palatka, Rat Island Yacht Club -- and, preferably, competitors will face an incoming tide the length of the 24-mile course before dropping the hook for a dutch treat dinner, a crystal decanter and a handshake.

And so it came to pass, Saturday, October 23, 2010 as 18 sailboats maneuvered for position near the starting line between market #48 and the committee-boat.
Yachts tacked and turned, spilling what wind their was from their sails to avoid a false start, before the sequence of colored flags and air-horn warnings marked the moment...they were off! 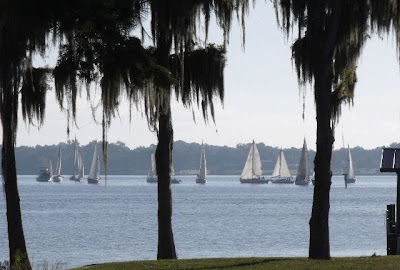 Slightly faster than the speed of growing grass, with more hot air passing between kamikaze crews (as hulls passed each other with barely a gel-coat thickness between them) than the apparent breeze, they headed for the unseen finish line.

The St. Johns River has the distinction of being the only north-flowing river in Florida. People in this hemisphere seem to think going South is downhill (tourist drivers heading North after their vacation, tend to lean forward). However, the St. John's connection to the Atlantic Ocean near Jacksonville, a major US Navy seaport city, allows for a tidal-flow which influences the waters more than fifty miles up/downstream.

“Stink-Pot” and “Rag-Bag” are some of the kinder words exchanged between power boat operators and sailors, especially when fishermen pick up the scent of a fish kill and pour on the coals to get to where they want to go – while a white-knuckle yacht-helmsman who has strategically placed his crew to achieve a delicate balance to maintain a wind-slot and make his rhumb line, blocks his way – and a rooster-tail followed by a mountainous wake throws everything akimbo.

At those times, the air can match the blue of the sky!

Especially, on a weekend.