Wish I had This Sign at the Old Book Shop 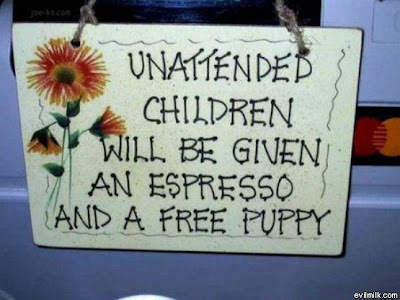 As a former bookshop owner I firmly believed children of a certain age and disposition should be parked outside the shop, or allowed to play in traffic, before entering my Old Book Shop http://anoldbooklook.com/about.asp (note the little kinder clambering up the shelves in window-painting)

Along with a sign on the door reading: "Open by Appointment - or Chance" I had another which told callers: "Buyers Welcome, Browers Tolerated, Children @#!!$". Most parents got the message and sent the potential book-destroyer and shelf-mountaineer,(think Richmal Crompton's WILLIAM) off with their other half.

Except the fairly distinguished chap who entered one day with a child who had the control of spit on a skillet. I lasted an agonizing 23.01 seconds before cornering and confronting the Young Master and told him unless he treated my precious tomes with respect, he would be ejected. Asking what he was interested in - cowboys, war,seriel-killers, I selected an appropriate book, and seated him on a stool across from my desk.

Papa, poking around somewhere in the stacks in the back, emerged a while later with a puzzled frown, glanced at his wide-eyed son clutching a book, thought better of it, paid for his puchase and left - hurridly.

Years later, said gent and his college-age son returned to my Palm Beach shop. The youth nodded briefly then quietly browsed the stock. Papa smiled and said, before dissapearing to rummage amongst the stacks: "Thank you. He's never forgotten his last visit here."

That was the last time I ever saw the former Canadian Inspector General, and his son.
Posted by Jack Owen at 8:01 AM