Sometime soon the last shuttle launch into space will fire off from Cape Canaveral, a couple of hundred miles south of here.

I'll wave as it goes my backyard just before the separation of booster tanks from rocket in a sequence we all, now, think of as being routine. 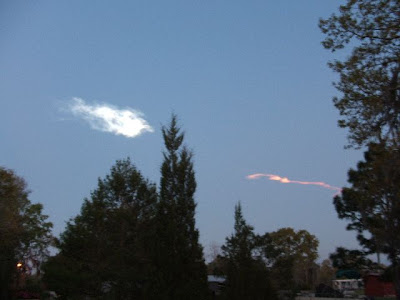 An earlier daytime launch seen from my backyard


But back in the days building up to its first launch of Columbia more than a quarter of a century ago, (April 12, 1981) the World was still excited about the race into space. A decade earlier (1969) Neil Armstrong became the first man in (known) history to step onto the moon's surface. I'm willing to bet, very few Floridians will forget where they were when THAT happened. One of the better “I remember when...” memory moments.

Due to its proximity and frequency of flights over the years, we became blase about launches from the Cape, until that dreadful crisp October morning in 1986 when Challenger exploded killing all seven astronauts aboard..

I was at a West Palm Beach marina helping a good friend (now departed) and skipper of a 54-foot corporate yacht top up his tanks when there was a commotion on a nearby boat.

“The goddamn shuttle just blew up!”

A guy hurled himself from the cabin of the sleek Rybovich sports fishing boat on the next dock, scrabbling for his binoculars.

He didn't need them.

Seemingly just north of overhead the bright clear blue sky was marred by a cluster of white vapor trails expanding outward from a dark central cloud. Miniscule black objects rained down, leaving faint trails behind, like the world's largest Fourth of July rocket exploding in daylight.

It was the world's largest rocket – to carry human beings on its back into space.

Disasters before and after that date have marred the unbelievable 20th Century exploration of outer space during my lifetime. No doubt further progress will leave more memorable milestones behind.

Hopefully the final launch of Discovery and recovery will merely be a sigh of relief at safely marking its date in history.